I’ve had a beard for the majority of the last 12-13 years. I usually keep it trimmed but lately I’ve been rockin’ it out. The problem with this is that the skin can become dry. Daily showering + shampoo’ing (with traditional shampoo) will sap the natural oils on the skin underneath your beard and cause dryness, resulting in itchiness.

Prior to my experience with Grave Before Shave, my only experience with beard oil (I’d used Clubman Pinaud’s beard conditioner for a couple of years) was Dollar Shave Club’s (which is a good product, don’t get me wrong, but I wanted something new and different).

Jim Brakewood, Jr. from Chaos and Pain posted about how awesome the beard products from GBS are. I checked out the website, thought the graphics were cool and enjoyed the prospect of free shipping, but… hesitated on buying any. You see, I’m the type of person that feels guilty/remorseful if I buy anything for myself. I don’t know why; I’ve been this way for quite some time. I feel like I’m wasting money if I buy something that I might enjoy. I would rather spend money on somebody I love, y’know?

I told my girlfriend about Grave Before Shave. She surprised me with this: 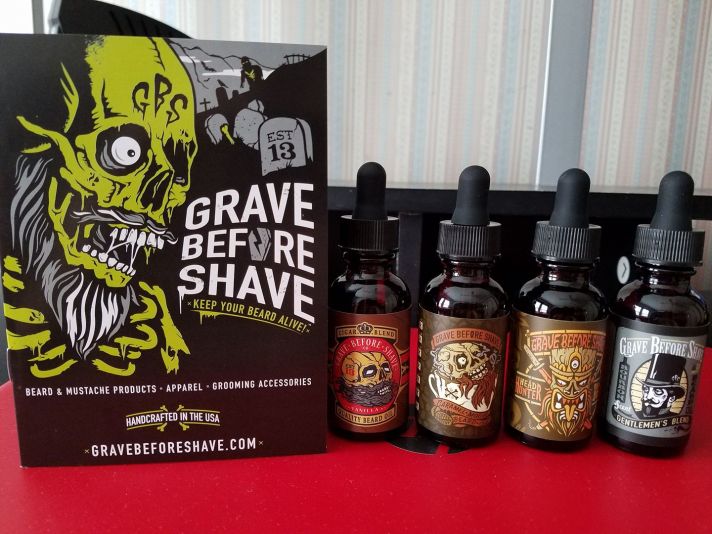 She bought me four beard oils from GBS: the cigar blend (my personal favorite), the caramel mocha, the ‘head hunter’ (tropical) and the gentlemen’s blend! She ordered them on a Friday night; they shipped on a Monday (from California) and got here (the other side of the country) on Wednesday!

The day after I received them, Wayne Bailey and Grave Before Shave released a brand new product: tequila limon! I couldn’t help myself; I went ahead and ordered it and the pine scent from the site in a duo pack. The new beard oils shipped out on a Friday and I got them today: Monday. 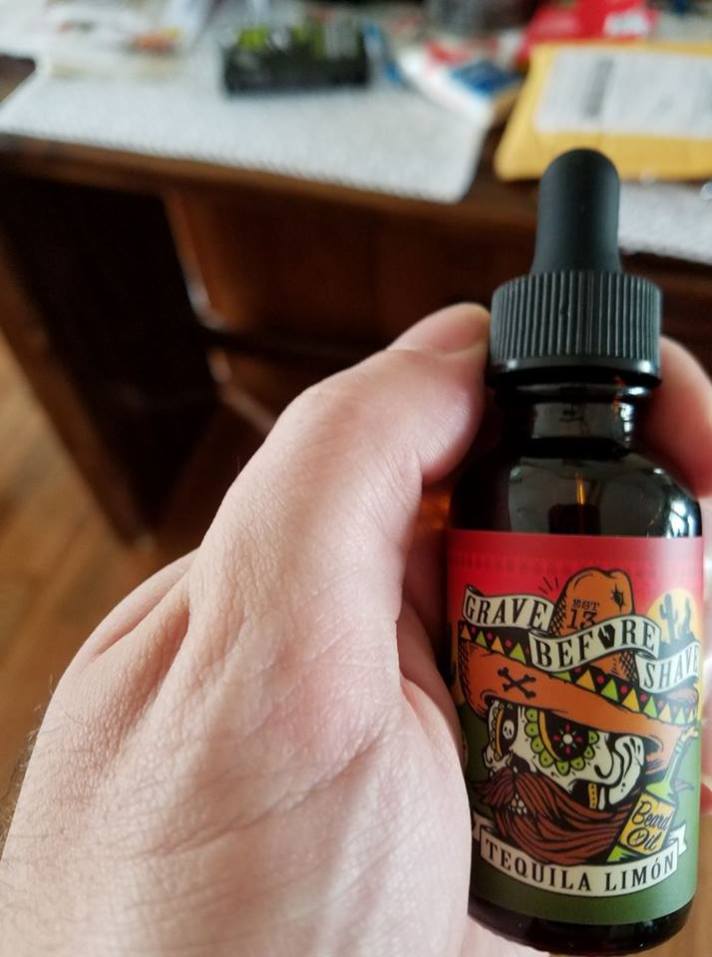 Needless to say, I love them. They all smell fantastic and they get the job done in regards to replenishing the oils you lose from a hot shower. I’ll eventually try out the beard wash they offer. The oils aren’t greasy nor will your beard feel like it’s weighed down upon using it.

I’ll rank my favorites from most favorite. They are all great.

1.) Grave Before Shave Cigar Blend ~~ I knew this scent would be my favorite before I even tried it. I love the smell of vanilla/pipe tobacco. My all-time favorite fragrance is Tom Ford’s Tobacco Vanille! This smells just about like it, or at least in the same vein! I get random whiffs of it throughout the day when I wear it (just like the other ones) and I absolutely love it. Doubt this will ever be topped as my favorite.

2.) Grave Before Shave Tequila Limon ~~ I found out this was released, because my girlfriend shouted, “Damn it!” When I asked her what the hell was wrong, she told me, “Grave Before fuckin’ Shave released a new scent today. Why couldn’t they have released it last week?!” When I saw the new scent, I was floored. I had to have it. I’m an occasional tequila enthusiast with a knack for, ahem, occasional imbibing. I couldn’t pass this one up. Well, it arrived, and holy shit. The new tequila limon smells so friggin’ good! I should just post this as 1B to Cigar Blend’s 1A, because it stands up to it as my favorite! It’s a strong, but not an overpowering smell, of tequila. The lemon lime apparent in the scent blends so well with it. It’s super refreshing and I know I’ll be getting some more pretty soon.

4.) Grave Before Shave Caramel Mocha ~~ This is an interesting one. I love it, but it smells just as it’s described! Like a sweet coffee! I enjoy it, but damn if I don’t smell like dessert. I think the chocolate ends up being stronger than the caramel or coffee notes. My girlfriend says I smell like a chocolate chip cookie. The caramel is very apparent at first when you apply it, but fades into the background.

5.) Grave Before Shave Head Hunter ~~ Love this stuff just like I do the others. It’s going to be a fantastic summer time scent. Makes me want to go to the beach, kick back on the balcony with some beers and chill out. This is my girlfriend’s second or, er, third favorite after Gentlemen’s Blend and Tequila Limon.

6.) Grave Before Shave Pine ~~ I couldn’t decide what to get with the Tequila Limon beard oil, so I opted to go with the pine. It smells good, but it also smells similar to the Dollar Beard Club beard oil, which is a slight negative. I should have gone with GBS’s Bay Rum.

I can’t recommend their beard oil enough. Like I said, I’ll eventually try out the beard shampoo and the balms. Top notch products — so far — backed by an American company with the consumer’s interest in mind. Wayne Bailey is a cool dude. Support his hard work!

View all posts by Troy

This site uses Akismet to reduce spam. Learn how your comment data is processed.

Here at Troy's Thoughts on Sports, there are no flashy pictures, objective opinions or 3-post-a-day features. There are, indeed, however, plenty of colorful expletives being emitted in excessive fashion (trying to tone it down, sometimes) and valid truths between the lines in the guise of opinions. Don't be afraid to opine your own.

I'm usually too lazy to proofread, all out of apathy, so all typos or misplaced/misused words you see were likely used with haste.